Over the past 10 to 15 years fertiliser prices have increased significantly and the livestock grazier’s ability to pay has decreased. There is also the perception that the traditional fertiliser usage is not giving the response in both pasture and livestock growth rates that the graziers have expected and presumably have been obtaining in the past.

This project is an attempt to put some independent science behind a limited number of nutrients and/or products that has had earlier science attached to their preceding use. Those chosen was based on local knowledge and determined by the one’s most likely to give a pasture response. 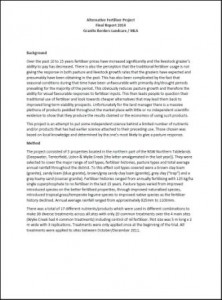